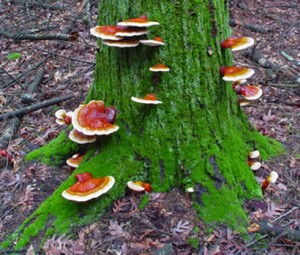 A mushroom that has withstood the test of time in China for more than 4,000 years was discovered recently in Europe and America, and now also with us.
For more than 2000 years Reishi mushrooms (Ganoderma Lucidum) have occupied the coveted status with Chinese medical experts as an extremely effective remedy that was very widely used in traditional Chinese medicine as an alternative approach as a means for treating many diseases. Reishi mushrooms are a legendary miracle of all medicinal herbs because of its obvious superior healing properties and the absence of side effects and toxins during use. Reishi is naturally very hard to find and is therefore reserved for Asian kings and the rich until the second half of the 20th century when organized cultivation of red Reishi mushrooms started in Japan and when this miraculous mushroom become available to the population around the world.
Reishi mushrooms were regarded in ancient China as a "medicine of kings," Dr. Shi-Jean Lee, the most famous doctor of the Ming Dynasty in his book Ban Chao Gang Moo "Great Encyclopedia of Medicinal Plants" had recommended the use of Ling Zhi mushroom (Ganoderma lucidum) as effective in the fight against many diseases and that long-term consumption of GanodermeLucidum allows the formation of a healthy organism. He considered Reishi mushroom to be the healthiest of all medicinal plants, in front of Ginseng for its following qualities:

The biggest potential of Ganoderma is to boost the immune system of the human body. Reishi - Ganoderma Lucidum contains high concentration of organic germanium, polysaccharides and triterpene. It has been proven that these active components strengthen our immune cells and enhance our immune system. Consuming red Reishi mushroom, therefore, take into account the prevention and increase body immunity. Reishi mushrooms have a very wide application. According to traditional Chinese medicine, Ganoderma lucidum helps to better functioning, and is used for treatment of diseases of the five key organs in humans - the heart, lungs, liver, pancreas and kidneys.
Ganoderma successfully treats primarily all these organs, but also many other – thanks to the most important effect of "substantial support that provides the root vitality of the human body", which, namely, improves the immunity of the human body in general. Ganoderma mushrooms help regulate the entire body mechanism and metabolism - and ensure that all organs are working normally.

Fertile body of Ganoderma is very bitter. This feature have no other fungi.
The degree of bitterness varies on the place of production, cultivation conditions, etc.
Triterpenes / triterpenoids are bitter components of Ganoderma, which attract the attention of its well-known pharmacological activities. The higher the level of triterpenoids, the stronger is bitterness. Triterpenes have a significant bioactivity, as an antioxidant, hepatoprotective, antiallergic, antihypertensive, then lowers cholesterol, inhibit platelet aggregation, because they inhibit some enzymes (such as β-galactosidase, the converse enzyme angiotensin, cholesterol synthase ...).
The main ingredients of the triterpene fraction are ganodermna acid A, B, C, and B lucidenic acid and ganodermanontriol.

To date, there are more than 200 isolated polysaccharides from the fruiting bodies, spores, mycelium and cultivation of Ganoderma in broth. Importance of polysaccharides as pharmaceutical has a long history, and has received considerable attention in recent years.
Polysaccharides contained in Ganoderma differ from polysaccharides of carbohydrate, eg in rice and potatoes. Β-glucan from Ganoderma has superior antioxidant properties.
Ganoderanses, as ganoderans A, B and C of Ganoderma can increase the utilization of glucose.
This is because they help to increase the levels of plasma insulin both in normal cells and those that have poor glucose. The hypoglycemic activity of Ganoderma is reflected in the increase in plasma levels of insulin and glucose metabolism acceleration not only in peripheral tissues but also in the liver.

Proteins called LZP-1, LZP-2 and LZP-3 were obtained from fruiting bodies and spores exhibit mitogenic activity. A new protein with immune modulation effect is Ling-Zhi-8, was isolated from the mycelia of Ganoderma. Other bioactive proteins from Ganoderma, such as lectin and ribonuclease were also isolated.

Glycoproteins were also isolated from Ganoderma. Glycoproteins are water soluble and have anti-tumor activity. Binding protein polysaccharides have been found as anti-viral agents against the Herpes simplex virus. Ganoderma lucidum polysaccharide peptide (GLPP) has antioxidant properties and can stimulate immune function.

Dietary fibers are high-molecular components, which are not digested or absorbed, but excreted in the faeces. Ganoderma contains dietary fibers belonging to β-glucans, chitin substance, polysaccharides and others, so certain pharmacological effects can be expected. They bind themselves to dangerous substances, preventing their absorption through the intestine and accelerating their excretion. Therefore, they are operating effectively in prevention.
Did you know that entering of 25-30 g of dietary fiber per day is recommended to maintain good health?

Organic germanium is often used as a dietary supplement for its therapeutic properties that are boosting immunity, oxygen enrichment, free radical scavenging, analgesia and detoxification of heavy metals.
Organic germanium is a precious ingredient that gives Ganoderma an important value.Organic germanium is adaptogenic, which means that it facilitates adaptation to stress, whether physical, emotional or chemical. Ganoderma lucidum is antimutagenic, an immunomodulator, an antioxidant.
Organic germanium increases the ability of red blood cells transport oxygen to 1.5 to 2 times.

Ganoderma contains various enzymes such as superoxide dismutase, and protein enzymes lysozyme. The body uses them to fight various diseases, for power generation and acceleration of metabolic processes
Lysozyme enzymes destroy the cell wall of bacteria hydrolyzing the polysaccharide component of the cell wall.
Superoxide dismutase is an important component of Ganoderma. It acts as an antioxidant and helps protect against harmful free radicals.

Adenosine is a purine nucleoside consisting of adenine and ribose and an integral part of the RNA.
It acts as an antiarrhythmic.
Nucleosides are components within which the nucleotides are cleaved with nucleotidase activity or chemical agents, and consist of a sugar with a purine or pyrimidine base. Nucleotidase is an enzyme that cleaves the nucleosides in nucleotides and orthophosphates.
Nucleotides are one of the components in which the nucleic acid is split by action of nucleases.
Shimizu and associates have in 1985. demonstrated that the active substance identified as the adenosine from Ganoderma inhibits platelet aggregation.

After consuming Ganoderma some activities occur in the body. They can be summarized in five phases:

Ganoderma may help in detecting hidden disorders and toxins in the body and regulate the functions of the body. During this process, the body will show some reactions. These reactions are not side effects, but it will help to detect the area affected by the disorder.

Ganoderma is known as "the queen of toxin removers" because of its power to remove excessive amounts of uric acid, lactic acid, cholesterol, fatty deposits and toxins that have accumulated in the body.

During the process of consumption, we can observe many reactions. They are a signal that the body is recovering.

Ganoderma will continue acting, primarily gradually strengthening the immune system to keep the body more resistant to disease. It is also a source of essential elements and vitamins.

The ultimate goal of consuming honey with Ganoderma is to maintain body functions at its optimum level and maintain youthfulness. 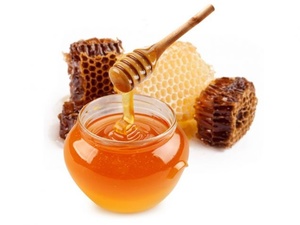 Honey is sweet and thick juice that honeybees form of nectar collected on flowers or sweet secretions (honey dew point) of some insects. Honey is the most perfect product of nature, it contains almost all the ingredients that build the human body.

Nectar that bees collect from flowers is the main source of carbohydrates that bees transform into easily digestible sugar - glucose and fructose, which is the main ingredient of honey.

Mature honey contains no more than 15% water, and bees cover ir in the honeycomb with wax caps to protect it from absorbing moisture and from decay. It also contains minerals, amino acids, high-quality organic acids such as formic, malic, citric, acetic, and succinic acid, pigments, various derivatives of chlorophyll, wax, inulin and vitamin B complex components.

All today known attempts at blending the industrial production of honey, despite the overwhelming technology and invested enormous resources, have given devastating results.

If we take honey with Ganoderma without fluid it is desirable to hold it in the mouth until it is dissolved. Due to light digestibility it currently restores lost energy while with a long term appliance it provides physical stamina and mental stability. The property of honey with Ganoderma makes it indispensable food in a healthy diet.

The chemical composition of honey

The main ingredients of honey are carbohydrates which make 95-99% of dry matter, depending on type. In honey we also find water, proteins, vitamins, enzymes and various minerals or mineral materials.

The composition of sugars in honey

By applying different scientific methods it was found that the sugars in honey are made ​​up of:
1. monosaccharides:
• fructose or levulose – very sweet monosaccharide quite soluble in water.
• glucose - the most widespread monosaccharide in nature
2. Disaccharides:
Maltose, turanose, isomaltose, sucrose, maltulose, isomaltulose, nigerose, trehalose, glutilose, laminate narbiose entibiose
3. oligosaccharides:
Erlose, panose, maltotriose, kestose, isomaltobiose, melecitose, isopanose.
The water in the honey
Water is another important after the carbohydrate component meda.Zakonski ratio of water in honey depends on the type and amounts of 15 - 20%. The amount of water present in the honey affects its viscosity, weight and krystalisation. The quantity of water in honey is not constant because of its hydroscopicity.

Acid in honey
The honey that honeybees gather is composed of a series of organic acids. Formic acid for example. is present with 10% of the quantity of honey, although once thought to be more and that is one of the main present acids. Honey contains in addition to formic also oxalic, amber, citric, tartaric, lactic, gluconic, pyroglutamic, maleic, valeric, and benzoic acid.

Proteins
Proteins in honey are composed of albumin, globulin and peptones which together make up half of colloidal substances in honey. Proteins largely exceed in the honey from salivary glands of bees when the nectar and honeydew is processed in the stomach of a bee in honey.

Vitamins
Vitamins are, among other things, an integral part of honey, however, they are found in very small amounts, insufficient for the needs of the human body. Thus in honey we find vitamin C, B complex, niacin, pantothenic acid, biotin and folic acid. The amount of vitamins in honey depends primarily on the flowers from which the bees collect nectar, pollen presence, condition and ripeness of honey and the method of its storage.

The nutritional value of honey:

Eventually, sooner or later each honey has to crystallize. Crystallization is the natural characteristic of each honey. The speed of crystallization depends on the type of honey, and can vary from a few weeks to a couple of years. It is a completely natural process that does not affect the quality of honey.

Decrystallization of honey
Honey can easily return to a liquid state, however, it should bear in mind that honey does not withstand high temperatures. When heated to high temperatures honey loses its natural properties and therefore the maximum heating temperature of honey is 41 ° C. Honey decrystallizes by putting packages into the pan with hot water on the stove by loosening the lid. The temperature should be kept at minimum one or two minutes and until the honey becomes liquid.

Honey in life of people always represented a healthy and available food, that held out despite the emergence of cheaper industrial sugar . In all folk medicine practitioners in all parts of the world recorded a number of recipes with more or less honey. Genetically modified modern food , smoking, stress , pollution of water and some medicines are prone to the accumulation of harmful substances in the body , but propolis successfully prevents disease. Its healing powers have long been known in folk medicine so honey used for strengthening the body, especially children and the elderly. And scientists ascribe antibacterial, antiseptic and antioxidant properties to honey. Honey is extremely beneficial for health , and enhanses, as argued, the work function of the heart and circulatory system. Scientists are still exploring to what degree it is salutary, but have no doubt about it. Especially in combination with Ganoderma.